A couple of people were taken with the notion, mentioned in my review of “Faith and Empire,” that by making a foot- or handprint, one creates a permanent link with the object, the way, say, the shroud that wrapped a saint’s body becomes a relic.

Credit goes to  Kathryn Selig Brown, a scholar of Tibetan art, for teaching me (and a whole bunch of other peoople) this.  At a conference of ACSAA (American Council for Southern Asian Art), she described taking images of thangkas to her podiatrist because she wanted to know whether these were actual footprints artists had then traced with paint.  The answer? Yes. in fact, the doctor diagnosed specific foot problems in some.  Selig Brown later curated a show at the Katonah Museum of Art I always regretted missing (here’s the NYT review) but thankfully it has a catalog, Eternal Presence: Handprints and Footprints in Buddhist Art, which has proved a valuable resource.

Another resource is the page on the Himalayan Art Resources website devoted to footprints and handprints.

And now, for anyone scratching their heads wondering what one earth sparked this blog, here is the passage in my review:

The section devoted to the Fifth Dalai Lama also includes works that are particularly relevant today. The Fifth Dalai Lama had been a spiritual leader for 20 years when, in 1642, he also assumed the kingship of Tibet. Over the ensuing years he developed an elaborate genealogy that connected him, through reincarnation, to an ever-growing number of revered historical figures, both secular and religious. 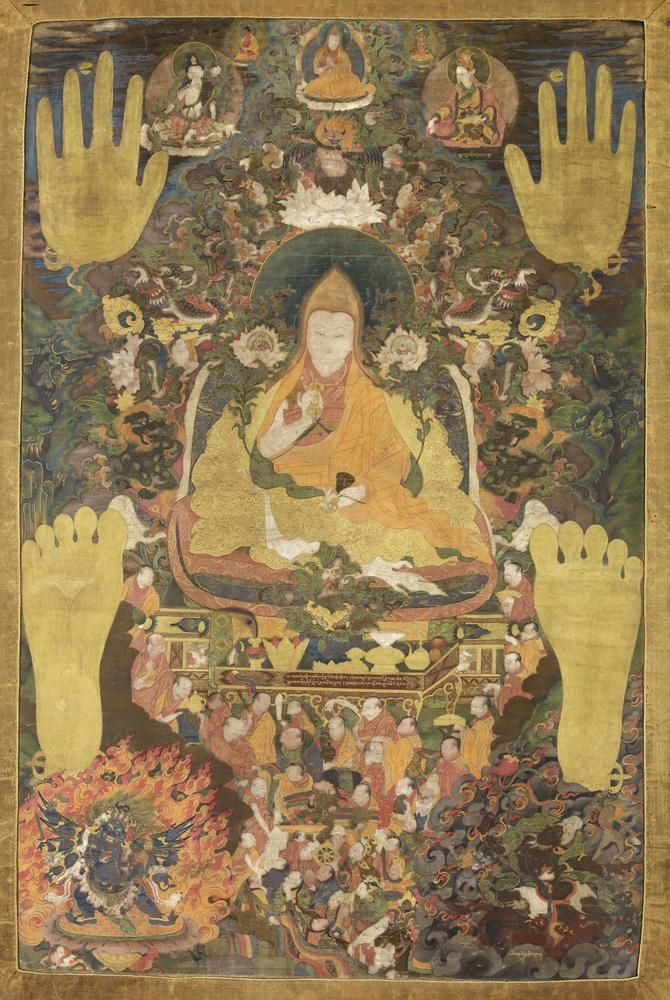 The show includes several representations of this lineage, the most potent of which is a late 17th-century painting of the Fifth Dalai Lama surrounded by some of his antecedents. More significantly, the Fifth Dalai Lama applied his handprints and footprints, an act that many believe transfers his presence to the thangka, transforming it into a relic. As the label makes clear, this painting was one of a series of portraits, each of a different incarnation. Some of these are illustrated in the catalog, and all feature the Fifth Dalai Lama’s handprints and footprints. The message is clear: He is each of these men. One of these previous selves was none other than Songtsen Gampo, who merged the role of Tibetan king with that of bodhisattva, a precedent that legitimized the Fifth Dalai Lama’s own assumption of temporal powers.