Standing before a six-paneled folding screen at the Giuseppe Piva Gallery’s show, I found myself thinking about, of all things, perspective. Painted in the 17th century, the screen depicts moments from a battle in October 1600 that ushered in the Tokugawa shogunate. As great as the battle scenes are, what caught my attention was the setting: A landscape streaked with gold clouds in which the trees in the foreground are taller than those in the background — a familiar trick to denote 3-D depth on a 2-D surface.  Like the tiny, tiny trees silhouetted along the curve of a mountain in another early 17th-century screen,  “Field of Pinks and Rising Moon.”   In the foreground, however, rows of pink flowers are placed one above the other, separated by horizontal bands of clouds.  Only the latter imply distance, for the flowers, like the notes on a musical score, remain the same size regardless of their presumed distance from us.

Art historians like to trace when and how non-Europeans incorporated and adapted European techniques of perspective. Typically, they write in terms of how much or little an artist mastered linear or single-point perspective, often leaving me with the sense (whether or not this is what they actually mean) that they’re assuming Japanese or Indian artists wanted to get it right; that, when they didn’t, it was because they weren’t able to.

Yet, there are plenty of reasons painters might not want to, say, order a landscape or court scene according to Europeans’ linear perspective. The trade off-just might be too great, the price for realism too high.  The layered rhythm of those clumps of pink flowers, for example. Or the patterning we so often see in many Indian works.  I couldn’t stop thinking about this as I stood before “A Picchvai Of The Haveli Of Shri Nathji During The Annakut Festival Nathdwara,” a large, late-19th century painting made in northwest India and up for sale in one of Bonham’s auctions (you can get a closer look on-line).  It depicts a pilgrimage site devoted to a spiritual leader of a Hindu sect, the artist mixing and matching techniques, from bird’s eye-view to single-point perspective.

At first glance, it looks as though he has mapped the complex, showing us exactly what is where.  But, in the landscape, for example, he receded distant objects and used the diagonals to lead the eye into the gateway. 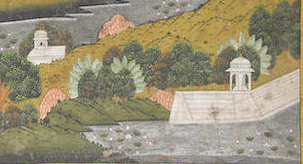 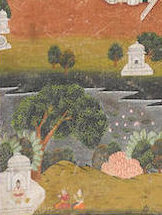 He sometimes exploded views so that we have to tilt the walls up in our mind’s eye to get the sense of the enclosed space.   This gives us oodles of information about the shape of windows and doorways while, at the same time, creating a sense of order through grids and checkerboard-like effects. 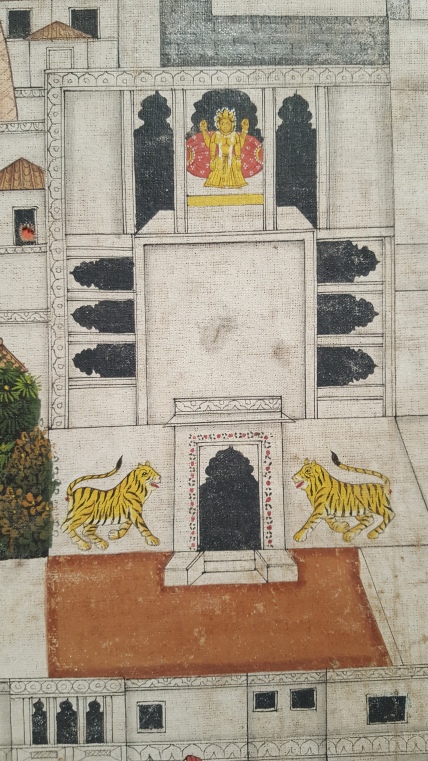 The artist also often stacked scenes just as he stacked figures, contradicting the very devices he used to convey depth through diagonal lines in some of the tiled floors.

Had the artist consistently adopted European techniques, what would he– what would we have lost?  Among others, information about the architecture and the way people used different spaces in the complex; a sense of dynamism and movement; and myriad rhythms whether created by topsy-turvy compositions in which animals sometimes appear upside down, or the repetition of windows and bushes, or the transformation of devotees and cows crowding before the central shrine into orchestrated symmetrical patterns.

Mighty big trade-offs I cannot imagine the artist would want to make.