Remember when the National Museum of Women in the Arts opened?  Some objected to the notion of segregating female artists while others shrugged that the museum was  redundant, unnecessary.  Then the museum put on exhibitions that gave the likes of Camille Claudel her due and — what do you know? — other museums started to do the same. That was 25 years ago an, yes, we have since come along way.  But there is still a ways to go, baby. 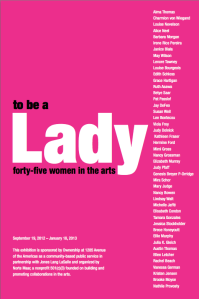 Helping us move forward is Jason Andrew’s beautifully curated To Be A Lady, at 1285 Avenue of the Americas (between 51st+52nd Str), New York.  You can check out  images of all the works on display, but that is no substitute for seeing how  they interact in the groupings and sequences that Jason has created in two, separate parallel spaces on the ground floor of an office building.

and an equally large piece by Brece Honeycutt.

Part of the attraction is personal.  I met Lenore Tawney when she was 90, with a fantastic career behind her and still working in her loft on the lower East side.  Brece Honeycutt I met when she was starting out in the US after living in London.    A thrill to see both women in a show together along with a range of other wonderful artists.

The show runs through March 22 — hurry!